NOTE: This site is still under construction. This outline will eventually serve as a year long group project hopefully with the involvement of the College Community. 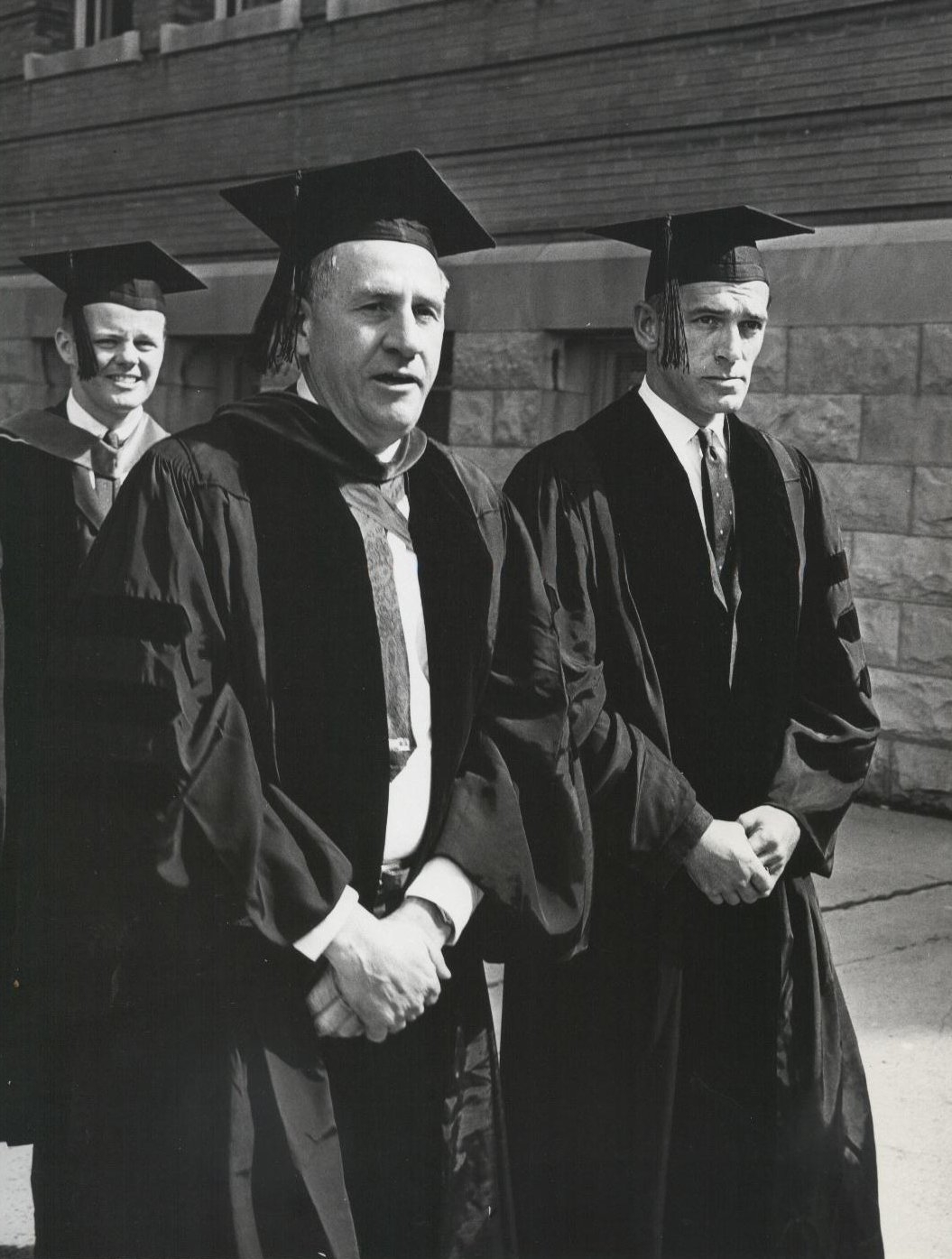 The Governor And The College

While Massachusetts could boast more prep schools, private colleges and universities, institutes, and academies than most states in the union, it became apparent in the 1950's that thousands of Bay State students would not have the opportunity to advance their education beyond a high school education. There was a population boom and an affordable solution was needed to meet the needs of State residents. Toward the end of the 1950's, community, business, and government leaders began to take up the issue in earnest. An audit of State Needs was conducted in 1958 and it was recommended that the Commonwealth establish a system of community colleges.  The Massachusetts Board Of Community Colleges was formed through  Act 3215, set forth through a motion by Representative Thomas Wojtkowski.

After substantial research, The Massachusetts Board of Regional Community Colleges submitted a report (1,2)  to Governor Foster Furcolo, recommending a system of two year community institutions of higher learning be established in the Commonwealth. Called the Horace Mann of the the 20th century, Governor Furcolo advocated tirelessly for a public higher education system that would serve students from every culture and socioeconomic background. After extensive demographic study, the board selected a number of tentative locations, including Pittsfield, in Berkshire County.

Citizens and community action groups volunteered time and gathered further information, surveying high school principals, students and local industry leadership. Planning priorities were carefully weighed and a pilot project begun. The board recommended that the first community college projected be instituted in Berkshire County. It was decided that the site would be at the former Pittsfield Central Junior High School.

Built in 1896 as the Pittsfield High School, the building had been renovated in the 1950's. Seventy-five thousand dollars was committed to additional renovations. It was suggested that no more than 125 students be admitted the first year. The proposed tuition was $200 per year.

Massachusetts' two year community college system was thus inaugurated with the opening of Berkshire Community College (1, 2) and Inauguration of Thomas E. O'Connell (2) who was sworn in as President on September 15, 1960 by Dr. Edward Russell, a member of the Massachusetts Board of Regional Community Colleges.

Mayor Raymond L. Haughey spoke for the city of Pittsfield. Dignitaries from government and academia as well as friends and family were present at this historic event. A procession stretched far, marshalled by the new Berkshire Community College faculty, and followed by a long list of guests. Students and their families, citizens from throughout the county, reporters and well wishers crowded the event.

Governor Foster Furcolo began to deliver the address, but couldn't. According to the Berkshire Eagle, "When called upon Governor Foster Furcolo advanced to the lectern. He stood there a few moments, his face working with emotion, then spread his hands and sat down, unable to speak. Tears glistened in his eyes. The audience rose and gave him an ovation." Governor Furcolo was "moved to tears at the realization of his dream of establishment of the first of Massachusetts' state regional community colleges, and was unable to give his prepared speech at the convocation ceremonies." The Governor's official greetings from the Commonwealth, (2, 3, 4, 5, 6) which he never read, is housed in the archives.

Originally nine trustees oversaw the supervision of the college, four appointed by the Governor. The first President was a 37 year old Dartmouth graduate and Worcester native named Thomas E. O'Connell. Dr. O'Connell had a strong background in education, government, and international business. He had worked with Nelson Rockefeller on technical assistance in Latin America as well as with Mayor Clark of Philadelphia. He had been the Deputy Director of New York State budget under William Averell Harriman and served as Executive Assistant to John Sloan Dickey, the President of Dartmouth College. On that day in September, he stood at the podium and announced that, "this college is being founded in a spirit of hope, and I refer you, ladies and gentleman, to our motto as an earnest of that spirit, 'to travel hopefully is a better thing than to arrive'."

Early on, Dr. O'Connell recognized the need to provide a strong liberal arts program with courses that were as good, if not better, than those taken by freshman and sophomores at private, four-year colleges. He recognized the importance of providing a superior education to students who might then transfer to other colleges and universities. Dr. O'Connell, a truly renaissance man whose own interests and accomplishments ran the gamut from international finance to drama, recognized the need of a well rounded curriculum. With the whole nation watching, Berkshire Community College opened its doors to area students (2) and to a brand new movement in higher education.  Congratulatory messages poured in from around the Commonwealth.

Within two years the school's enrollment had climbed to 320 students in the day program and 500 in evening classes. The school offered rigorous classes in the humanities and sciences, though student and academic services took some time to develop. The student government organization was established, and has continued to provide leadership in College affairs. Articles appeared in Life magazine, the New York Times and the Chicago Tribune. Luminaries arrived to give lectures and presentations, including Edward Kennedy and Alistair Cooke.

Berkshire Community College held its first graduation in June of 1961, with two graduates, both women. Marianne Collins of Lanesboro and Dorothy Garneau of Pittsfield both received an Associate in Science in Business degree.

In December, 1964, after only four and a half years, Berkshire Community College received its accreditation from the New England Association of Colleges and Secondary Schools - a record in terms of time. At that time, BCC's Board of Directors included artist Norman Rockwell.  Rockwell later illustrated the cover for one of BCC's Yearbooks.